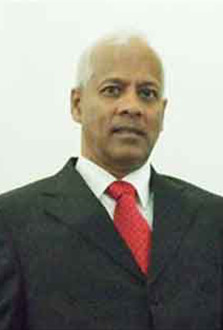 Dr. Rampersad began his tertiary education at the University of Manitoba Canada where he majored in Zoology. He then went on to pursue a medical degree at the University of the West Indies, graduating in 1978. After practicing medicine as a family practitioner for two years, he returned to university to pursue a diploma in anesthetics. He later changed his focus to business and entered an Executive MBA programme. One year into his course of business study, Dr. Rampersad was invited to pursue a programme in Management of the Heart Surgery Centre at Sheffield University in England. Upon his return to Trinidad, Dr. Rampersad commenced the Adult Heart Surgery programme at the Eric Williams Medical Sciences Complex (EWMSC) Mount Hope then went on to introduce the Paediatric Heart Surgery programme.

These programmes are now rated among the best in the world with morbidity and mortality rates well within international standards. To date, thousands of open-heart surgeries have been performed at the EWMSC under the auspices of Caribbean Heart Care Medcorp (CHCm). Dr. Rampersad is the Managing Director of CHCm and sits on the boards of several other companies. Despite his hectic schedule he continued his post-graduate studies in both Business and Medicine, and also obtained an LLB Honours degree in Law from the University of London in 2004. Dr. Rampersad’s conviction in the power of teamwork contributes significantly to his unique management style. He is a firm believer that employees are not only an integral part of an organisation but that they are its foundation and as such, should contribute to the decision-making process.

Over the years he has developed a model in which private and public sector health care organisations can work mutually and harmoniously with each other. This relationship with the EWMSC is unsurpassed in the Caribbean and has been successful for over 20 years. Dr. Rampersad’s commitment to maintaining good health spills over into his personal life as well, as evidenced by his steadfast physical exercise routine. He can often be seen on afternoons jogging around the EWMSC.